Birth Of The Bop

from Welcome to Wonderland by Swill & The Swaggerband 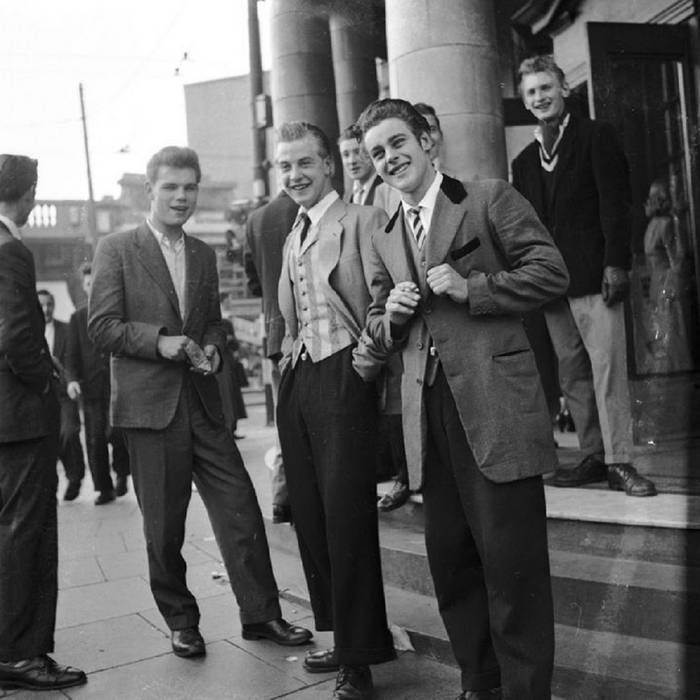 Originally appeared on the Hanwell Shuffle EP.
'Birth of the Bop' is a songwriting collaboration between myself (music) and Paul Simmonds (lyrics). I recorded it as a Swill & The Swaggerband B-side but it's a quirky number that I feel needs to get out on the road more so I am now working on a ukulele version - more on that later!

This rarely played song looks at the one of our favourite subcultures – the Teddy Boys.

Here's an extract from a new songbook I'm working on which will also include a couple of older tunes (it hasn't been proofread yet)...

There is a general misconception that the Teddy Boy phenomenon appeared in Britain during the mid-1950's as a result of the introduction of American Rock'n'Roll music.

In fact the origins of the Teddy Boys actually goes back to the late 1940's when Saville Row Tailor's attempted to revive the styles of the reign of King Edward VII, 1901-1910, into men's fashions. This was part of an extravagant snub to the Labour Government and a reaction to the austerity imposed in the years following the World War II.

The 'new look' was aimed at wealthy young officers out of the army and out on the town. However, it failed to take off with enough of the upper class veterans – perhaps due to the fact that the Edwardian era was a mere 35 years previous - who wants to wear the same clothes their dads had! Suddenly there was a glut on the expensive gear and the high-end tailors had no option but to sell off their goods as heavily discounted job lots to menswear shops in the run down, bombed out, parts of London. Thus began the rise of the Teddy Boys among working-class youths in London - pulling the rug out from beneath and middle / upperclass hipsters who now wanted to distance themselves from the style.

In 1955 Rock'n'Roll exploded onto British cinema screens in the shape of two landmark American films ‘Rock Around the Clock’ AND ‘Blackboard Jungle’ both of which featured "Rock Around the Clock" by Bill Haley & His Comets. This shot to #1 in the UK chart on Jan 13th 1955 and Rock'n'Roll quickly became adopted by Britain's Teddy Boys and from there on the style and the music became inseparable.

It seems somehow ironic that a fashion intended for the privileged few became the trademark of a significant British working class subculture from the post war years right up until the birth of punk rock!

from Welcome to Wonderland, released May 4, 2015

Little Brother joins the show to discuss their beautiful journey, plus tunes from Fat Tony