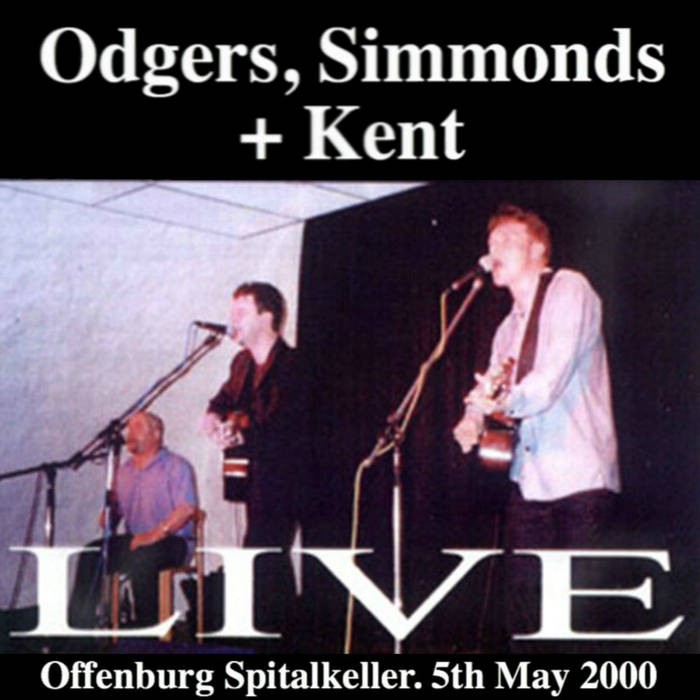 In May 2000 Phil 'Swill' Odgers, Paul Simmonds and Dave Kent pilled in the back of Johnny Parkers Vauxhall Astra Estate and did an adventure filled tour of Germany. It was a hot, sunny, spring and the windows were all covered with newspaper to keep out the suffocatting heat and glare (apart from the windscreen as Johnny had to stay awake and do the driving). This is a recording made by Philippe Ettori of the gig in Offenburg Spitalkeller on May 6th. He'd driven all the way from Paris and here too is his review:

The band after a pretty long journey was, nevertheless, as enthusiastic as the crowd. Very enthusiastic!

Tonight audience may not have been the usual habitual punters but they were all under the charm after the first song.

As I was writing the name of the songs in my little Hidden Agenda a few people ask me from which album it was possible to get them .In fact the TMTCH, LIBERTY CAGE and ODGERS & SIMMONDS’S CDs. So at the end of the gig lots of people bought the Best Of Album part 2, the EP I’WILL KEEP IT WITH MINE and of course the brand new CD BABY FISHLIPS with 2 new tracks. One of them THE TRIGGER , a duet between SWILL and MICK THOMAS (ex W.P.A.’s lead singer and a good friend of the band since more than a decade now) and the other the RISING ROAD.

So the crowd was more than pleased with the performance which shows PAUL & SWILL with the invaluable contribution of Mister Dave KENT from a different side.

DAVE like during the old days of the MEN and of course LIBERTY CAGE brought new power and life in a very varied show.

So for your listening pleasure, here is the set list of a stunning night with some great vocals, wonderful harmonies and breathtaking new folk rock :

GOING BACK TO COVENTRY - A stomping opener with a punchy grip.

NIGHTBIRD - The band still alive and kicking. A catchy tune which demonstrates, with a different angle, what these guys do so brilliantly.

PIECES OF PARADISE - A pure song of poetry and a perfect example of the multifariousness of the band.

BARRETT’S PRIVATEERS - As always all the audience was more than impressed by the emotional & passionate rendition of the song.

MERCY OF THE GUARDS - We returned here to the LIBERTY CAGE stylish pasture.

THE GHOSTS OF CABLE STREET - A version with a freshness vitality and a perfect encapsulation of the 16 years TMTCH’s career.

THE TRIGGER - I’m sure you will appreciate the 2 parts vocals harmonies with PAUL wonderful display.

REFUGEES - No one sings it quite like the inspiring uplifting voice of Mister DAVE KENT.

THE LIGHT - Another song from the brand new album, full of melancholy and emotion.

THE BELLS - One of the best of TMTCH’s songs and we are very lucky tonight to heard this intense version full of maturity.

YOU MAKE MY MIND STAND STILL - A great song with an interesting country influence not a cow punk track but more in the alternative movement currently very popular in UK.

THE GREEN FIELDS OF FRANCE - An ageless anthem from a rich musical past and tonight the song is intensified by the acoustic rendition.

GREGORY’s GIRL - DAVE KENT with a live version never released on CD but there is a rare studio recording somewhere.

PARTED FROM YOU - Like so many other songs an ideal candidate for a film soundtrack. Someone should pick this up and put it in the movies.

WALKIN’ TALKING - Fast and furious the MEN will be always an awesome live band and here's the song performed raw as it was written.

RIDE ON - Like every night during the tour the band explores some new directions and what better ending than a CHRISTY MOORE’s cover!

A very good shows indeed. In spite of a long journey back to Paris. It was A NIGHT TO REMEMBER.

The audience, the record company and the promoters were more than happy so be sure the trio will be back in the near future . We have to hope for the same feast on a regular basis in UK and France. But I’m pretty confident because the CD is distributed all over EUROPE in the USA and JAPAN.

sndtrak stops by with an Album of the Day Feature of his most recent release, FLIPS V1: Triple Lindy